The Hotel Brunswick’s story is one rich with history and is one that begins with a man named John Mulligan. Mulligan, a first generation Irish-American, came to Kingman in 1876 from Malden, Massachusetts to escape hardships. After sailing around North America and walking 60 miles to Kingman, Mulligan successfully established a number of mines before returning to his original trade of stone mason, which he had learned apprenticing for his father. With this trade, Mulligan earned a good living for him and his wife Sara Marie Lynch who he married in 1892.

The Brunswick was one of these historic buildings, and Mulligan created it in conjunction with John W. “Watt” Thompson. Thompson came to Kingman in the late 1870’s around the same time as Mulligan, and became well-liked by almost everyone he knew. It was believed that during the partners early years in Kingman, they both courted Sara Lynch (who Mulligan ended up marrying), although this did not seem to affect the friendship until later. Additionally, because Thompson was a native of New Brunswick, Canada, it is assumed that the hotel was named “The Brunswick” for this reason.

The construction of the much anticipated Brunswick finally began in the summer of 1907. Using Tufa stone quarried right from Kingman, the two owners designed their hotel to have “nothing but the best.” It was legendary for its solid brass beds, Waterford crystal, and telephones in every room. Additionally, the hotel had hot water heaters, electric hot and cold baths, gas lights, sanitary plumbing, and a unique air ventilation system. Needless to say, these were rare commodities in a town that only had tent buildings 24 years earlier. The Thompson-Mulligan Building, as it was referred to then, became well-known, and upon its completion in the winter of 1909, it was the first three story building of Kingman and the tallest building from Albuquerque to San Bernardino.

Unfortunately, in 1912, Mulligan and Thompson got into a fight and literally separated the building in half with a wall. Although the origin of the fight is not know for certain, it is believed that the two had a feud of Sara Marie Lynch, Mulligan’s wife, because they both had courted Sara before she chose to marry Mulligan. Whatever the reason for the fight, the once friends never spoke again. Each obtained 25 of the Brunswick’s rooms, plus Mulligan acquired the lobby and bar, whereas Thompson acquired the Chinese restaurant.

Even in the wake of the split, the Brunswick continued to thrive. Local miners were the main guests of the hotel, for underneath the Brunswick there was an underground tunnel that the miners used when traveling to and from work (The tunnel is still there today.). More famous visitors of the hotel also included Andy Devine, Barry Goldwater, and Clark Gable. Devine in fact owes his famous raspy voice to the Brunswick, as he obtained it from falling off the second floor balcony of the Brunswick. Clark Gable, on the other hand, married his wife Carole Lombard in Kingman and often frequented the hotel during this time. 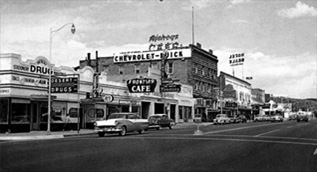 Hotel Brunswick after Thompson and Mulligan

Hotel Brunswick continued to thrive even after one of its creators, John Mulligan, passed away in 1935. Mulligan’s daughter-in-law, Hazel Edith Dunn, took over the Mulligan side of hotel after the death, continuing the family-run tradition. However, the Thompson side of the hotel did not bear the same family legacy as the Mulligan side and was sold to Joe Otera before the 1960’s. Otera operated only the Thompson side of the hotel, until 1966 when he bought the Mulligan side of the property from Hazel. Owning both sides of the hotel, Joe Otera finally brought down the dividing wall Thompson and Mulligan had but up after their feud. The Hotel Brunswick was a united whole once again. Otera sealed off the second and third floors of the hotel, and managed the El Mohave Restaurant in the bottom floor of the Hotel Brunswick. But even though the restaurant was a success for a few years, the upper levels quickly deteriorated from their lack of use—not one hotel guest stayed in the upper levels from 1972 to 1997. And in 1980, Otera left the whole hotel vacant.

In 1994, Priscilla “Pat” Davis and Rennie Davis bought the vacant property with hopes of restoring it to its original beauty. Pat had told multiple reporters that the idea of restoring the Brunswick first came to her in a dream in 1993. This dream soon became reality as the Davis’ began construction on the Brunswick turning it into a bed and breakfast. While some of the original hotel from 1909 still existed, many improvements were needed. Changes the Davis’ made included restoring the staircase to its original configuration, adding the balcony to the front that had been removed, and remodeling the cowboy rooms into guestrooms. The downstairs of the hotel also resumed its old use with the bar, restaurant, and lounge open and even painted their original colors. The Davis’ completed the restoration and opened its doors in 1997.

Despite the Davis’ effort though, the hotel foreclosed in the summer of 1998, only 13 months after its official opening. Multiple failed attempts of owners to revive the Hotel Brunswick occurred after the Davis’. First, in 1999 Gerard J. Guedon and Jessie Sayas-Guedon, tried to revitalize the Brunswick by bringing it their experience in the hospitality industry and Gerard’s knowledge of European cuisine. However, in 2006 the Guedon’s decided to focus their business elsewhere and sold the Hotel Brunswick to two couples, the Pfaff’s and Sixta’s. Not much record exists on the operations of the hotel under the ownership of the Pfaff and Sixta’s; however, the hotel itself wreaked evidence of the colleagues’ biter parting in 2010. Allegedly during the foreclosure of the hotel, the owners stripped it of all its valuables, with no regard for their historical content.

Werner Fleischmann found the Hotel Brunswick in 2012, physically bear, but full of history and, more importantly, full of potential. Thus, Werner Fleischmann purchased the Hotel Brunswick in the May of 2012 and is in the process of remodeling it to its original attractiveness. At present Fleischmann has many ideas for the Brunswick and is looking for tenants. Some possibilities for the Brunswick’s bottom floor rental spaces include an ice cream shop, coffee shop, sandwich shop, or microbrewery. The top floors will function as hotel rooms and business rooms. Because even though the Hotel Brunswick’s walls were stripped and drawers emptied, nobody could steal its historical value and stories—the stories of the two men who came to Arizona to strike new fortune and the stories of all those who have interacted with the Brunswick since. The Brunswick will thrive again.

We are currently accepting bookings through Airbnb.com only